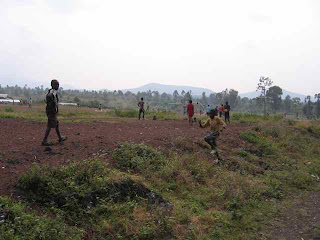 Thunder and lightning wracked the night before we woke up to a relatively becalmed Lake Kivu. Normally the cock starts crowing at 0430 – believe me, I know – and then a multitude of birds starts to join in with their incredible bird calls. Our guest house is right on the lake, so we get treated by a riotous dawn chorus every morning – mainly from a tree on the north side that has about 50 birds sitting in it looking out at the lake.

Goma has a humid but very temperate climate this time of year. It’s overcast most of the time. We’re several thousand feet up in the mountains so it’s cool and, while there are definitely mosquitoes around, I’ve not had to use the Mosi-guard or even the gauzy netting that curls above my bed.

Our visits today are to some important people in the local child protection network, the UN agencies that get involved, and to Maison Ngangi, a large Don Bosco complex. Don Bosco have worked in the Congo for over 100 years, which is amazing. Most of today was spent at Ngangi, so that is what I would like to tell you about – without any commercials, history, or slabs of information, you will be relieved to know!

Ngangi is essentially in two parts, a main area with a complex of buildings, sleeping quarters, and kitchens, warehouses and workshops, and Kinogo, a real town outside it where houses have been built onto the hardscrabble volcanic rock and ash from the lava that flooded Goma in 2004. 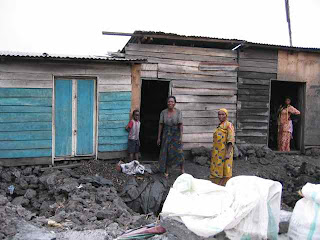 We started by walking over to and around Kinogo, where Don Bosco have built brightly coloured houses. There are 23 child-headed households here and 23 girls lodged here for training in sewing.

For sewing, Kinogo is an alternative for teaching to Marguerite where, for various reasons, some girls are unable to go. Some of them, for example, live quite a distance away, next to the volcano, so this is the nearest training centre. The courses are identical, save that the girls do more weaving in Kinogo. Once girls leave any of the programmes, they benefit from being external but still connected to Don Bosco, which aids reintegration and supports them through pooling their work and selling the goods. It normally takes them about a day to run up a dress, for example. 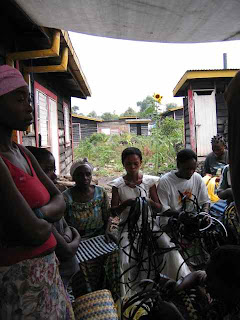 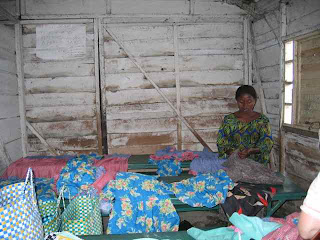 All the families in Kinogo are vulnerable to some extent or another and there are quite a few women also here, but very few men. What men there are are generally absent, in town trying to earn money. The facilities in Kinogo are basic, as the Don Bosco philosophy is to support, not overwhelm, so there is no running water or electricity in the houses, although various enterprising folks have installed electricity, expanded the houses, etc. The idea is that the support should not be too ‘comfortable’ as the objective is reintegration into the community – of course, the index of comfort would be defined differently here in the DRC.

Those on the microcredit scheme, supported by War Child, are concentrated in one area of Kinogo so we visit one of the sewing shops producing clothes and other goods, then go back to the main complex.

Ngangi has a health centre which also services Maison Marguerite. There are 2 doctors and 4 nurses on duty. Doctors will come here in the evening and if children can be treated here – and typically that will include malaria, diarrhoea, minor cuts and scrapes – they do, otherwise they are referred to the hospital. 2 girls supported by War Child are here. Sometimes the health centre acts as an outpatient centre, and 4 girls attended yesterday for daily care. We met a doctor there from Project Congo who said that the facilities were being built up from a few years ago, when they were scaled back during the crisis. At that time, every room in the centre and elsewhere was being used as a hospital, as they can expand to meet demand. They’ve had oxygen for 2 years, x-ray for 1 year, in the case of the last a portable unit she had brought from the U.S. She comes out on behalf of Project Congo for 3 weeks every year.

We then had a general discussion about these very basic facilities and how there was plenty of scope to improve them – was the problem a lack of money? Mike said that too many programmes, even now, had the wrong idea about what would work in a particular situation. If you stay small and containable, and add new things gradually – such as a portable x-ray – that can work well. If you send farm equipment or electric lighting, what happens when the equipment needs maintenance or you’ve got to replace the light bulb? 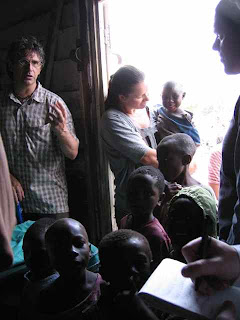 We then visit Ushindi, part of Ngangi where live, amongst others, babies and girls in transition. Don Bosco are good at working with babies, getting them up to normal height and weight, and have no infant mortality. 80% of children have mothers who have passed away, either in childbirth or from rape trauma. It is very expensive to care for babies, and War Child had to adjust its funding accordingly. There is one team for babies, one for toddlers, and we are all deeply affected by what we see, children at the very beginning of their lives being nurtured here. In all cases, there is an attempt to trace families of children; some will be associated with the military, so very hard to trace. A little boy grabs me by the legs as we depart! 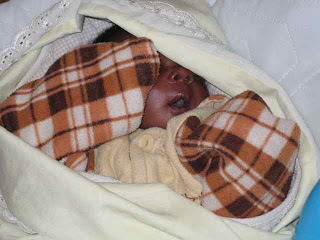 We then go to see a more prosaic aspect of the work that Don Bosco does, the kitchens, where we meet Carla, who takes us through how Don Bosco feeds 3,300 persons a day at Ngangi. Much of the food will come from the World Food Programme and is warehoused with fresh food – meat, fish, fruit and vegetables – sourced locally. Don Bosco have plantations near Masisi in which they produce some of this, which also allows another chance to raise funds and provide experiences for children, but the plantations have not been fully exploited because of the IDP (internally displaced persons) and refugee problems. They want to develop the revenue from the sale of local products.

Older girls will also be beneficiaries of the programmes, and will support each other and younger girls. All children at Ngangi are abandoned or orphaned and will live in a house here. War Child contributes by funding certain staff who support its target beneficiaries. There is a dorm for older children; a social worker will always be on hand to support them. And, as with everywhere in Don Bosco, you can live at Ushindi and benefit from the programmes, or live outside and travel to them and still benefit. There are courses in electricity, carpentry, plumbing, sewing and masonry. 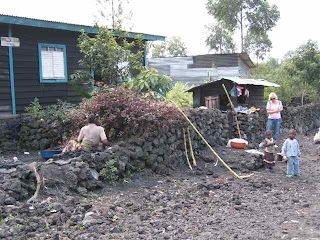 Generally, the counselling work with girls pays dividends, but the most difficult situation to handle is reintegration, especially if insecure – girls often don’t want to go back as they could be in danger (rape) again and may need mediation and work prior to reintegration. Girls from Rutschru and Masisi dominate the programmes, but they can be from other provinces (e.g. Kindu) or Rwanda.

More children are being educated as families have greater means; this has a big effect on family stability. Over 10,000 children have asked to join the Don Bosco programmes, but they can only take 3,300.

About 100 girls have gone through the microcredit programme, which supports those in starting businesses so that they can maintain themselves. The problem is that demand exceeds supply for the programme. They enhanced the previous programme using funds from War Child. The programme provides all the means to do the work and the success rate is 95%. The microcredit programme includes two types of activities: (i) small retail, e.g. women selling charcoal by the side of the road, and (ii) prototype project, which is done to test a particular type of activity for inclusion in the menu of programmes. They will frequently back a category of activity to see if they can expand it, support more in developing a sustainable livelihood. With (ii), often Don Bosco will lend money, and provide service and/or credit facility. Microcredit is potentially offered to all, not restricted to particular types of children. Finally, when the credit is
repaid, there is a small interest fee charged that is used to pay for staffing. 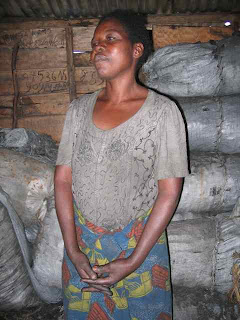 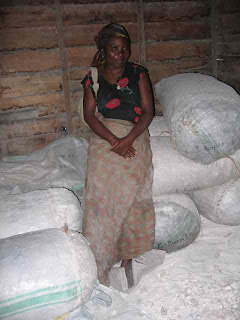 We then went out to visit 3 microcredit businesses, a charcoal seller, a manioc seller, and a pharmacist. In the first case, the owner used to go up to 150km away to get large bags of charcoal, then return and sell the charcoal in smaller quantities by the roadside. Then the microcredit programme got involved and allowed her to scale up and get more charcoal, so now she has a lorry going up there on a regular basis and has expanded into other, larger quantities. As she has been more successful, she has gone from having 1 child in school to having 3 in school.

In the second case, this was largely along the same lines, buying amounts in quantity (wholesale) then taking a turn on selling retail. The manioc seller also used the money to put more of her children through school.

In the third, this was a more straightforward retail business from a slot in the wall, which is a typical place to find a pharmacy in Goma. Mike, however, is not your typical pharmacist but, in this case, he alertly went behind the counter so most of us could fit in!!!

Thanks to all the staff at Don Bosco and, as always, to all the kids and to the women who allowed us to visit, ask questions, and take pictures. 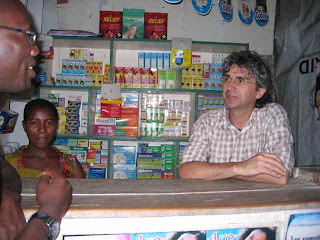 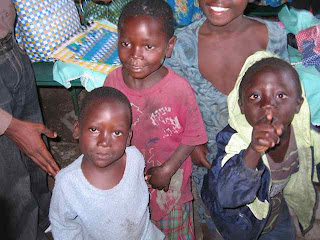