Bright sunshine glows behind the curtains at the Hotel Chez Lando in Kigali, Rwanda, and I roll out of bed to the sound of coucals outside the room, their loopy bird calls cheering me into the day. We leave at 08:30 for the Democratic Republic of Congo. After breakfast, the War Child jeep is loaded up with the team and their bags and then motors across the neat layout of central Kigali to the road leading into the hills and to the border with the DRC. 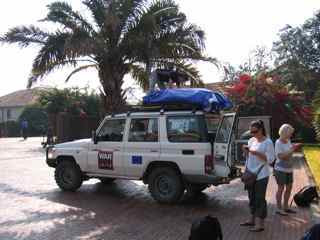 We arrived the previous night in darkness, speckled lights of the city spreading out over the valley from Kigali International. The airport in Kigali is on a hill so the views are spectacular, and you appreciate them even more because Kigali International Airport is just about the easiest airport ever to escape from, the immigration straightforward, the checks light, the people friendly, the terminal uncrowded. Our Field Director, Mike, is waiting for us and stays with us the night in Kigali. Going to Goma in eastern DRC, it’s much, much easier to fly to Kigali on the west of Rwanda, then go over the border than to fly to Kinshasa and take an internal flight. You also avoid flying on any Congo airlines, which are not amongst the top 10 in the world for safety!

Our driver is full of news from Goma, where there have been 3 NGO carjackings in the centre in the last week. It’s unusual behaviour in the middle of Goma and gives us no comfort whatsoever. However, Mike decided to withhold some vital information until later: one set of persons in the car were taken into the middle of the forest and released there alive, but without their car. Just the news of the carjackings is enough to make us decide to drown our doubts with a few beers to help us adjust and slough off the rigours of the 9 hours we’ve spent in the air getting here.

The story is that we are a party of 5 coming to visit War Child’s projects in the DRC. The DRC has been racked with bloodshed, terrorism, war, throughout most of its short existence as a country, and for a long time before. This has led to a terrible situation where in parts of the country there has barely been functioning government; where marauding and illegal and heartless bands of gunmen masquerading as armies have terrorised and destroyed innocent civilians; where children have been recruited as soldiers; and where displaced peoples and families and children have lives that are blighted for years if not lifetimes.

The team consists of our leader, the Mighty Warrior, my brother, Jude and Wanda. My brother and Jude are significant players in providing resources for War Child to do its work with conflict-affected children; Mighty Warrior and Wanda are part of the War Child tribe. We sit cheek-by-jowl in the jeep for the drive to the border, making only a few stops en route to admire the scenery, to stretch our legs, or to have some lunch. Mike, Wanda and Jude are in the front, the boyz in the back. Everyone takes turns telling stories or remarking on the landscape while Mike keeps up a steady stream of informed comment and incredible detail on what we are seeing and doing. But he does this drive a lot! 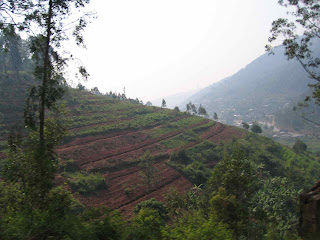 It’s a country of hills – it’s known as Land of a Thousand Hills - and mountains and rich, red soils, and the road out of Kigali is excellent, so we make pretty good time. It’s just that the hills take a long time to drive around, so the 150 km. or so is winding, hardly ever straight or flat, and takes 3 or 4 hours to do. Never mind – there is plenty to see on the way, such as the persons walking by the roadside, each one of them in a line like beads in a necklace, often carrying things on their heads, such as fruit or vegetables in gigantic baskets. 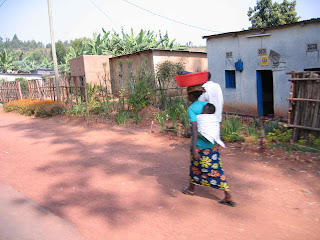 We drive through hamlets and villages and more substantial towns, the houses and buildings a mix of mud brick, concrete and brick. Nearly every one will have their own local bar, in one case the Bar Beijing, painted blue to fit with the colours of the Congolese beer, Primus, which confirms what Mike told us last night: we would see a great deal of Chinese in Rwanda, here to build infrastructure and roads.

There is the occasional goat or sheep or cow, not very many. In between the hills, there are crops such as corn, and one rare flat featured gigantic tea plantations, stretching off to the lower ridges of the next hill. 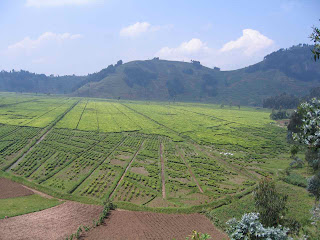 That stop nearly caused a mini-riot as a crowd of children suddenly appeared around us, and Wanda fished a sack of sweets out of her magic bag of goodies. Once back in the jeep she surfaced a bag of wasabi peas for us to snack on as we went around the next bend.

We finally arrive at Lake Kivu from where we can see the DRC on the other side of the lake. 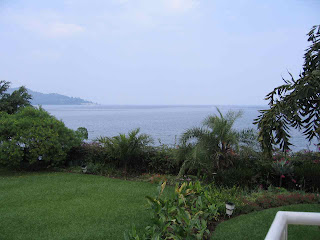 Lunch is at a place called the White Rock, which Mike has chosen not for its local cuisine, he explains, but because the service is reasonably prompt, so we can get moving. We are now in the border town of Gisenyi and we drive down to the border, where we all disembark, sidle up to the border office and hand in our Rwandan departure cards (where do all these thousands of cards go???). Then, it’s DRC time…

Compared to the relative order of Rwanda, the DRC side of the border is a mess. The paved road runs out to be replaced by gravel – or, perhaps, no gravel. There are persons walking around everywhere all over the place. It appears scrubby, dirty and chaotic. Mike has chosen this place to cross because it’s the easiest, however, so we follow behind the Mighty Warrior and walk towards the gatehouse, where a bemused and somewhat detached man sits on a chair looking at passports and visas all day. He asks Wanda to take off her sunglasses so that he can check who she is. He’s looking at mine when suddenly his mobile phone rings, so shoves the papers back in my hand.

I can’t provide any pictures of this because we’re not allowed to take them as it’s deemed too sensitive. Beyond the Rwandan border, all persons have to leave their vehicles and walk over, so Mike gets cleared then drives the jeep to the other side, where we join him and go to the final stage, the office, where we sit for about 45 minutes while passports are turned over, examined further, and the details carefully written on pads of graph paper. We were sitting in the shade of two trees, one avocado, one mango, so I guess we could forgive them.

Finally, we are through without mishap – although in the confusion I boneheadedly think I’ve left my camera behind in Rwanda, but am clearly mistaken when we get back in the jeep and it’s intact – and drive on lower grade roads along Lake Kivu, seeing various luxury hotels that are probably what is left of the sleepy tourist town that Goma used to be in Belgian times. We lurch and jerk through the streets to the office, where we meet the team, then go off to the hotel and get settled in before we go out for dinner at Le Chalet, which is excellent, and gets us set up for an early start tomorrow to Masisi, through the rainforest east of Goma. The road is full of potholes but, Mike believes, relatively safe, and we have to go, as War Child are considering expanding to establish a project there. Mighty Warrior orders us all to be ready to leave at 0800 sharp. After an eventful and noisy night punctuated by a couple of thunderstorms, I awake to the usual unusual birdcalls, we meet for breakfast, then depart.

Thanks for the title of today's entry and this blog to Randy Weston, pianist extraordinaire and blender of African music with jazz.