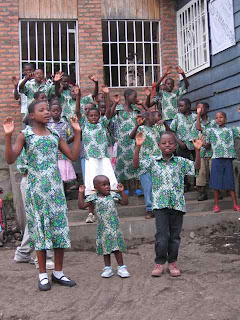 I woke up to a BBC World Service Africa report this morning about the Democratic Republic of Congo being the rape capital of the world, although it would be more accurate to describe it as the rape country. The reason is the number of sexual assaults and rapes predominantly by militia or ex-militia in conflict-affected zones, although War Child believes that this is changing, and that many are now committed by civilians in these zones. The specific incident that led to the report was the 60 rapes recorded – and I emphasise heavily that word - earlier in the month in South Kivu, with 100 people in total suffering rape or some form of trauma. The perpetrators were 150/200 former rebels integrated into the DRC Army that deserted from a local training centre on 9/10 June. There was looting and general thieving as well, but nothing as serious as the rapes.

Which is the other side of Sister Alvera’s wonderful children that we met yesterday at Flamme d’Amour, so wonderful in fact, that I wanted to balance this sober beginning to today’s entry by featuring some more pictures of her singing children…The DRC Sound of Music it ain’t!!! 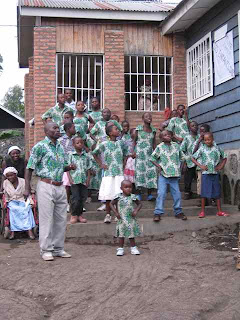 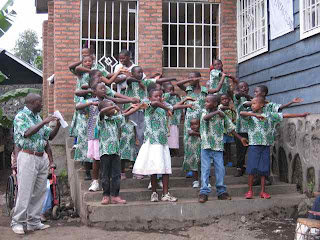 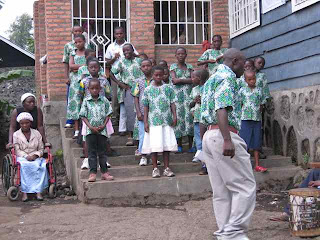 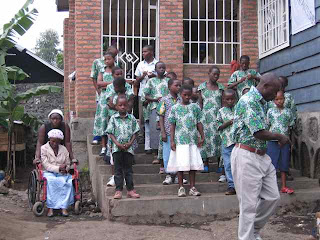 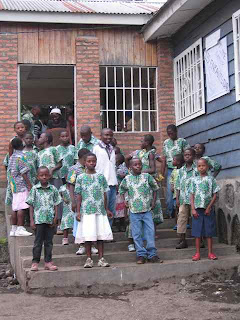 This morning’s visit is to Anna, who is in Don Bosco’s independent living programme, which is self-explanatory. War Child funding allowed Don Bosco to open up the programme to girls for the first time (it had been boys-only before) and there are now three girls in the programme. We got in the jeep and drove to her home in Mabanga over some of the worst roads we’d ever seen so far – and that’s saying something! 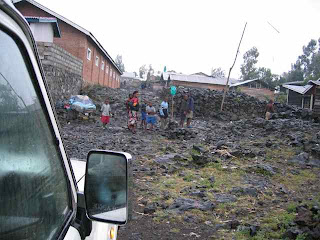 She was an orphan living with her grandmother and with the legacy of family conflict from her parents’ time. She’s 17 now. She was originally from Goma and was at Maison Marguerite for a year, where she learned cooking. She’s now going to school and in her ‘spare’ time selling baked goods, especially doughnuts but, as we were about to find out, other more varied items as well. She still has conflict with her family and there is a general social stigma about women living on their own, which was described to us as one of the biggest challenges anyone like this will have. For that reason, I will put up no pictures of her, but I can provide evidence of her work.

Anna eventually wants to become a nun. She told us the terrible events that led her to Maison Marguerite, again through the usual Swahili/French/English 3-way, edited from my notes:

"Bandits kidnapped me and blindfolded me and took me far away from Goma to a hideout in the forest. They secured me in a hole for 2 weeks, and gave me no food or drink at all. I developed lesions in my throat. Then the men then took me out and threatened to kill me. However, the man who was guarding me had sympathy with me and allowed me to escape. They did not intend to rape me, just kill me. I think my father’s family probably arranged the kidnapping.

I still had the blindfold on when the guard told me that I was free to go. I walked for 2 weeks, managing to find some water on the way, then found out I had been held in Rwanda. I managed to get across the border illegally with a smuggler and came back to Goma to stay with my grandmother, then I went to Ngangi. I wasn’t in great shape mentally, and I could not go back home, so I went to Maison Marguerite. The psychologist there spent a lot of time with me and, outside that, I learned a lot about cooking and went to classes. They tried to get me back together with my grandmother, but it did not work. After that, I got onto the independent living programme with another girl named Susanne. She looked for her family for over 3 years and couldn’t find them. Then, someone recognised her, and proposed sending her to Masisi, where they believed her family came from. She started to have nightmares, and wanted to kill herself at the thought of going back, so she went back to Maison Marguerite. Her parents were killed in Rwanda, and she tried living with a foster family, but it didn’t work out.

I’m very happy with my life here now. With the suffering I have been through and the breaks that I’ve had, I would like to help others, hence my ambition to become a nun. Whereas my grandmother used to pay for my education before, I now go to school at Maison Marguerite every day, studying physics and pedagogy – we’ve started the exam period already – and when we’re finished in July I will go back to selling my doughnuts. I make enough money to live, and pay for electricity and water; for the water I have to walk about 2 minutes. I have always performed well in school and, with all the training that I’ve had in cooking and sewing, I’m confident that I have the knowledge to make myself an independent life and play a part in the community. 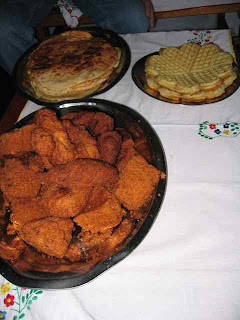 At that point, Anna brought out plates of doughnuts, chapatis, and waffles, and we tried some of her excellent products, then packed them up to take back to the office, got into the jeep, and bounced and jounced away.

Our second visit that morning was to the local child protection committee in Mabanga, which is supported by War Child. There was already a local committee, so our approach in this case was to provide training and guidance. The focal point for child protection in the district is also head of the district, so it has powerful support. The committee consists of 13 people who each have geographical responsibilities for Mabanga Sud, with a population of 82,000 living side by side with 11,000 people in a military camp; there are then representatives for each street and area. Children are the majority of residents in the neighbourhood, so the effort is a necessary and important one.

Children in Mabanga Sud have many difficulties and problems. Children are exploited by being sent for and carrying heavy containers of water. There are lots of children living in the street. The usual health problems mentioned in other blogs are also present here. These are layered on top of being near the army encampment. Children end up exploited in or as prostitutes in the camp. The committee has no means of getting into the camp to try to sort these problems, nor any way of stopping children from the camp causing problems in Mabanga Sud. They have a better relationship with the camp leader, though, and hope to make progress on these soon. 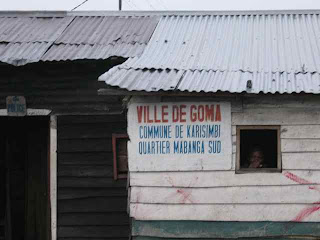 The elders explained that the awareness campaigns War Child have been running have had a real effect, and we saw some of the posters explaining exploitation, child soldiers, etc. Children are now more aware of and demanding their rights; in turn, parents and families are now more aware of the rights that children should have and it is having an effect on their behaviour.

One problem that they cited was ‘motivation’, i.e. they are looking for some kind of flow of payments for phone credits (for the phone calls that they have to make) and even for time (as the time is taken away from other income generating activities). The same issue came up in Masisi the other day so we go away to ponder some solutions.

For lunch, Mike had reserved a table at Fati Mata. He’d not been there before, but asked around and it got some good comments from everyone locally. There, we had the most gigantic tilapia I’d ever seen, easily overlapping the plate, and barbecued to a crisp with plenty of herbs and spices. C’est la roi du tilapia. Highly recommended if you’re in Goma. Meanwhile, when we come to pay, my brother continues his ongoing and continuing saga of a ripped $20 bill. It has a tiny tear in the bottom and nobody will accept it. Even the ever-helpful Mike has refused: “sorry, can’t help you with that!”

After that the team go back to the office for our debrief with Mike. We have taken away collectively some clear impressions and issues from our visit to Goma. I won’t list them all here, but I mention just a few:

without education being at the core of a child’s life, no progress can be made in the DRC;

focus on girls is right and that has been proven

everything is small scale, but focus means War Child makes a big difference with what it does

partnership working – we do much of our work through partners (by funding and specifying, a delivery relationship; or by collaboration) and the

importance of this as we grow cannot be understated; perhaps we should be doing some more work on that (field directors?) by coming up

with protocols or other ways of working

work with most vulnerable most important, and how do we maintain that focus as we grow and

resist the temptation to chase funding? 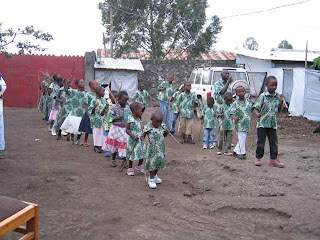 We then knocked off work with the staff and went to the Mamba Club, where a typical Congo scenario unfolded: we ordered beers and samosas and got chatting around the table about our week; the lights and television suddenly went dead; this roaring sound started in the corner, a generator sputtering into life; and then our conversations resumed once again. If you are in the DRC for any time, it’s likely to happen to you at least once! After our gigantic lunch, we had no need of any food, but still ended up at Coco Jambo for a nightcap and some snacks, and said our regretful goodbyes for a wonderful near-week in Goma.

The next day we went to the Goma airstrip for our UN flight to Kinshasa, stopping en route to pick up some of the famous North Kivu cheese from around Masisi. Getting on the UN flight was somewhat surreal and involved several weighings of baggage, an overweight fee, and a number of negotations and discussions, after which we got on our flight and landed in Kinshasa about 2 hours later.

Thanks to Anna for inspiring the title of today’s entry – and thanks too for the great cakes!